November 10th 2009, the yankees where back on top of the baseball world for the first time in nine years. Throughout the whole postseason the yankees went right threw teams to reach the world seirs. The phillies weren't going to go down with out a fight said short stop Jimmie Rollins. It was game six of the world series, and the yankees were one win away from being world champs. Long loved Yankee outfielder Hideki Matsui had the game of his life with a home run, and six RBI's helping the Yankees walk to a 7-3 win over the Phillies, Matsui also won the MVP award of the world series with his perfromance in game 6. 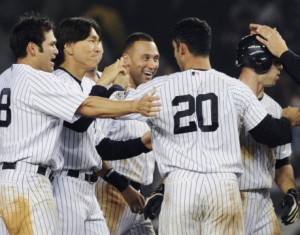 Personally I'm a Red Sox fan, but my favorite player in baseball is the Yankees short stop and captian Derek Jeter. I was very excited to see the Yankees win just to see Jeter get another ring.  Jeterbatted .407 highest on his team, also leading his team with 11 hits. So yes im happy that Jeter one another ring, but I wouldn't have mined to see the Sox win another one this year.